Mental Toughness … a Key to Success

You don’t necessarily have to train like a champion athlete to achieve success in pursuit of your weight loss and/or fitness goals … but you certainly need to think like one.

As our clients challenge themselves in a variety of ways from our 8-Week Fat Loss Challenge to Boot Camp, Mums In Motion/ spin/ boxing/ run group sessions, running or other events … they may find themselves battling many “demons” to achieve their goals.

According to Olympic gold medalist Herb Elliott, mental toughness “is the essential component in success – the strength to ignore the little voice, to push on … be dogged, absolutely relentless, in the quest for your goal”.

In his book “Winning Attitudes (Sport’s messages for achievement in life)”, Herb talks about mental toughness as being “the one – the indefinable quality that provides the difference between the great competitor and the ordinary competitor”.

Whether your goal is to lose 2kg or 20kg; run 1km without stopping or win an Olympic medal, Herb’s message about mental toughness is equally relevant … and will be the difference between achieving great results or ordinary results.

No doubt you will have to make some sacrifice(s) to achieve your goal(s) … and it is through that process that you gain your mental toughness – and “winning” edge.

Following is an extract from Herb’s book, written by Danni Roche about her sacrifice to make the Australia women’s hockey team for the 1996 Olympic Games in Atlanta. She gave up hamburgers and chips for THREE YEARS … and not only made the team, but won an Olympic gold medal.

“You might do a hundred things – and they might add up to one per cent – which could be the difference. So, I gave up the hamburgers and chips – which was really hard every time I drove past a fast food outlet. I gave them up for physical reasons, to improve fitness and reduce body fat – but I actually think the biggest gain I got from it was greater mental toughness, mental strength and discipline, because of the fact that I was really strong about it. It probably gave me about .0001 per cent of a physical edge … but two or three per cent in mental edge. Just taking that stand gave me a greater focus, a greater sense of purpose.”

If you want to do something extraordinary in the personal challenge you have set, then remember Danni’s three-year “sacrifice” and Herb’s words about mental toughness.

There are lessons for life, not just sport in his messages.

“Mental toughness has many components, but for an athlete the best path to mental toughness is to put yourself outside the comfort zone in the training – and to accept the discomfort as an essential part of them growing into a better athlete. Be positive about it – instead of whingeing about it.

“The person who is not mentally tough has learned through their training and racing experience to rely on excuses for not actually having been able to do something extraordinary.” 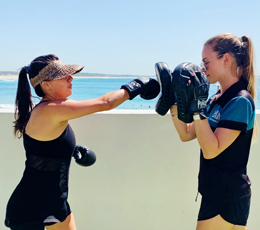 SUCCESS STORIES "After winning the Fat Loss Challenge in 2012 I was determined to maintain my fitness..” More
Nicole Whitehill
Fitter now than in my 20’s